Airline passengers in dark about rights, advocate says
Stranded fliers often don't know what's good for them when it comes to delays or cancelled flights 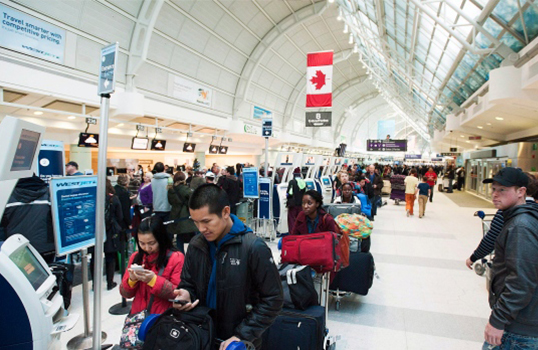 Air passengers often aren't aware of their rights when they've been left stranded by an airline, unlike their European counterparts. (Aaron Vincent Elkaim/Canadian Press)

As stories of frustrated and weary airline passengers dominate the news due to a combination of crowded flights and exceedingly bad weather, it seems clear that many don't know much about what rights they can demand of the airline that left them stranded.

Airlines are federally regulated but the same government that is attacking telecommunications companies over cellphone charges and billing plans has resisted two NDP private members' bills on an airline passenger bill of rights.

Gabor Lukacs, a Halifax mathematician and an airline passenger rights advocate, says most Canadian airline passengers simply aren't aware of the rights they have when they're bumped from overbooked flights, or when their flights are cancelled or their luggage lost.

Lukacs has taken on airlines several times in cases that resulted in important new rights for passengers. He estimates he has about two dozen cases filed with the Canadian Transportation Agency (CTA), an independent quasi-judicial tribunal that adjudicates passenger complaints on a case by case basis.

When Lukacs was bumped from an overbooked Air Canada flight, he took his complaint to the CTA. The result was that the compensation Air Canada must pay bumped passengers was increased to amounts ranging from $200 to $800 depending on the length of the delay, a significant jump from the $100 in cash or $200 in vouchers previously offered.

He also helps passengers fight their own cases, and if complaints end up in the courts, he sometimes works as a clerk for lawyers representing aggrieved passengers.

One of the passengers Lukacs advised was Rob Tonus, whose return flight to Toronto from Paris was cancelled in August 2012.

In a phone interview, Tonus explained he didn't know his flight was cancelled until he checked Air Canada's website the day before his scheduled departure. When he rebooked his flight for the day after he was supposed to fly home, he asked about hotel rooms and meals for him and his wife and two children. "It's Paris, after all," he said.

He said an Air Canada agent 1 perc kell nekem is at a call centre told him there were no limits to what he could spend, something he asked her to confirm with a manager.

Tonus was initially told his flight was delayed due to a mechanical problem, although Air Canada later said the delay was because of a medical emergency on the incoming flight.

When he sent his receipts to Air Canada for a refund he was offered only $150 for each hotel room and $30 a day per person for meals, for a total of $420. (Later, the airline also offered him a 25 per cent discount for four future tickets, which he hasn't used).

"I could have gone to the Ritz," he said. He didn't, but ended up spending over $1,200 for two hotel rooms and meals for his family in Paris, almost twice the amount Air Canada was willing to pay.

"We were staying at a Best Western. We'd been there for a couple of days already," he said. He booked two rooms at the same hotel for another day but couldn't get the same rate. "It's not like we went whole hog."

After hearing Lukacs talking about air passenger rights on CBC Radio, he phoned him.

Lukacs told him since his cancelled flight was departing from Paris, the European Union's passenger rights policy applied to his case. He supplied Tonus with European case law backing up this position.

Tonus wrote to the French transport ministry, and on January 6, 16 months after his cancelled flight, he received an email from Air Canada promising to reimburse him for the full cost of his hotel rooms and meals for his family for the extra day he stayed in Paris.

Unlike Canada, the EU has a consumer friendly website that clearly and simply explains airline passenger rights. Lukacs said the rules are also prominently displayed in European airports.

Lukacs said that both in Europe and in Canada airlines do not have to compensate passengers for long delays or cancellations due to extraordinary circumstances such as bad weather.

"They have to fly you out at the next earliest opportunity ... If we're talking about two, three, four, five days after the storm and they still haven't cleared their backlog, that means they're doing something wrong and that will trigger liability," he said.

But bad weather doesn't get airlines off the hook for compensating passengers for lost or displaced luggage.

"If the plane can't fly, the baggage should be where the passenger is," Lukacs said.

A spokesperson for Air Canada would not comment to CBC News about Tonus's cancelled flight because he still has an active complaint before the French government for further compensation for his delay.

"What I can tell you though is that we follow all the applicable laws where we operate," Peter Fitzpatrick said in an email. "We also have information on our website for customers about what to do when travel is disrupted."

Fitzpatrick also pointed out Air Canada offers $40 compensation per day for meals, although Tonus was initially reimbursed only $30 for himself and his family's meals while waiting for their flight.

In an email to CBC News, the Canadian Transportation Agency detailed its efforts to make passengers more aware of their rights. It publishes a Fly Smart guide that urges passengers to consult each airline's tariffs or conditions of carriage, available on their websites.

The tariffs, which must be compliant with the Canadian Transportation Act and the Montreal Convention, an international treaty that sets out passenger rights, can run to hundreds of pages.

"The Canadian Transportation Agency thinks passengers should read a long legal document and know that it's your contract," Lukacs said.

Tonus would like it to be easier for passengers to find out about their rights, which is why he's eager to talk about his own experience. "Because that was a full plane. And I don't think anybody has had the kind of success that I've had."