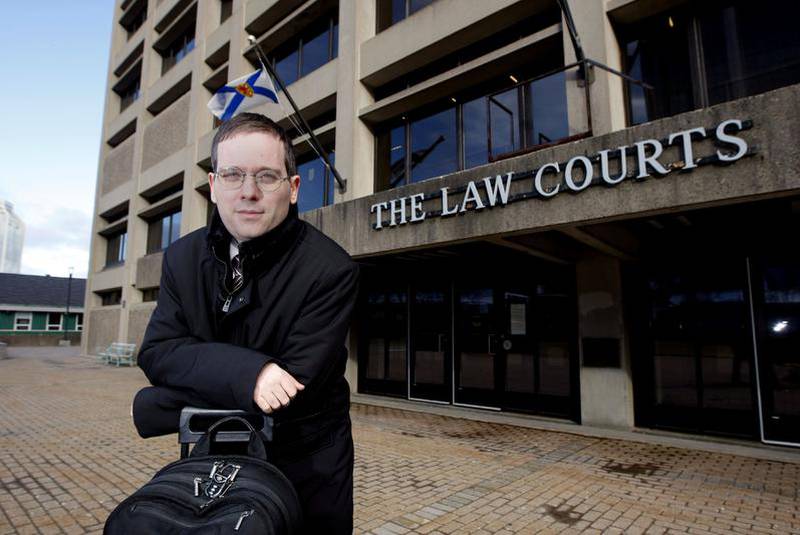 Gábor Lukács' friends joke that if they want to see him they have to go to court. Courts and classrooms are two of his familiar haunts. As a Google search is quick to sum up Lukács is a child math prodigy and airline passenger rights advocate who has had a stellar run of legal victories against airlines for failure to provide a service. He's won so many cases he doesn't know the actual number. Media stories say so far he's won in excess of 27 cases against airlines and regulators. But there's precious little else about the man.

He has a career, teaching mathematics at Dalhousie University. Running the Passenger Rights Facebook page – with the help of an unidentified group of supporters – is his private, yet public passion.

He's passionate about music and movies. In Halifax he sings with the university choir and is a frequent concert goer, and his conversation is peppered with film references.

Lukács who lived in Hungary, Israel, Manitoba, Toronto and Nova Scotia came to Halifax in 2005 as a Killam Lecturer at Dalhousie. The friendliness of his colleagues and of the people in general convinced him this is his forever home.

“I found that human contact here is very easy and happens without effort. Halifax is the place where I feel most at home in Canada.”

As a hiker, cyclist, canoe and kayak aficionado Lukács also appreciates the quick, easy access to nature. He can both cycle to work and to Dollar Lake.

But what frustrates him is the Bluenose/Canadian acceptance of less than adequate service and deference to authority. His advocacy for passenger rights grew out of a strong sense of right and wrong that developed in childhood. He was a little boy when his parents' marriage broke up. He and his father, who was a philosophy professor in Hungary, moved to Israel.

“My activism started probably at age eight or nine because when my father, who didn't speak much Hebrew, was talking to our lawyer, I sat in his lap negotiating with our lawyer.”

Another incident was a problem with his father's passport renewal.

“I eventually had to call the person in charge and tell him if you don't issue this passport I am going to file an application” for a review, which was a type of complaint. “I hadn't done it before, but I was able to go to the library and check the laws myself.”

His math discipline allowed him to grasp written rules and regulations.

Asked if he is the world's unluckiest flier given the amount of litigation he has been involved in, Lukács says, “I typically take airlines to court over issues of policy, not over my own personal experience. Usually what I see is that the laws are set out in the law books and the airlines do something completely different. And that is what,” he chuckles, “rubs me the wrong way.”

“I'm not trying to get any kind of personal benefit here. It's strictly about something which is wrong, which everybody sees is wrong, but nobody has the energy or willingness or time to fix. Even I don't think I can fix it all by myself, I don't have that kind of naivete. I'm not trying to save the world. What I am doing I view as an educational mission, where I educate people about what the law is, how it works and how it is supposed to work. That is how things change.”

He's careful not to compare or equate his passenger advocacy with deeper fundamental human rights. He continues, “When you look at Canada's geography, flying is an essential service, it's not really a choice. If travel by air becomes dysfunctional everybody suffers from it.”

In March he addressed a senate standing committee on transportation to speak against Bill C-49, which deals with passenger rights. C-49 would double the length of time passengers may be confined to an aircraft without water and food, from the current 90 minutes to three hours. Lukács likened the change to “inhumane” and “unreasonable.” He told senators that while the government portrayed C-49 as improving passengers' rights, “the bill seeks to remove or reduce the rights that passengers already have.”

Ideally, he would like all passengers to “recognize your time is your property” and when airlines delay your travel, they damage your property.

“I would like passengers to consider that your time has monetary value. If an airline wastes your time, they have harmed your property and you should think of it and treat it the same way as if they had damaged your car."

When addressing service failures with the airline, Lukács' recommendation is to record everything from booking the original ticket to any and everything said in the airport and on board the aircraft.

“Just be very very very aware that unless you document things yourself airline employees may claim you did something wrong.”

And if any airline employee or anyone else asks you to stop recording, don't.

“Canada is a one-person consent jurisdiction” to being recorded. He says if an airline or airport employee asks you to stop tell them, “Sorry I don't need your permission. An airline employee cannot refuse to give service on that basis, it's unlawful and in a dispute a passenger would be doing the most reasonable thing to protect themselves and to take precautionary steps because the airline may have any number of people who will testify how badly the passenger was behaving. So the passenger will need the silent witness. That's how also how the courts have been looking at recordings as ‘a silent witness.'”

He urges passengers not to be complacent and take everything from the airlines at face value.

“Those statements are often false and the airline employees themselves are often displaying tremendous ignorance about the rules.”

Like many parents, Lukács' father sometimes questions how much time he spends in passenger advocacy. Lukács says, “He has split views. He's very happy for the successes, but on the other hand he criticizes me that I should perhaps be dealing in human rights issues and refugees. He thinks my skills would be better used if I were to take on areas like this.”

When not fighting the good fight for airline passengers, Lukács' first love is teaching.

“I feel I am a different person in class. Somehow when I go to university I leave bad moods and outside world behind. It's uplifting.”

Lukács' other love is flight.

“I love flying. One of the things I would love to do, but don't think it would happen, is get my pilot's licence, but it costs a lot to keep it up. I've been up twice with a flight instructor in a small aircraft and absolutely loved it. It's marvellous and all those things you learn in mathematics and trigonometry become real physics when you're in flying.”

For those of us who let others do the flying, Lukács final advice to passengers is to maintain control of your emotions. As much as passengers have a right to be angry over delays and service failures, you have a stronger case if you remain calm and let the airline employee lose it.

Then visit his passenger rights Facebook page. Lukács currently has a complaint filed with the Canadian Transportation Agency against Air Canada for the length of time passengers can be kept on the tarmac without compensation.