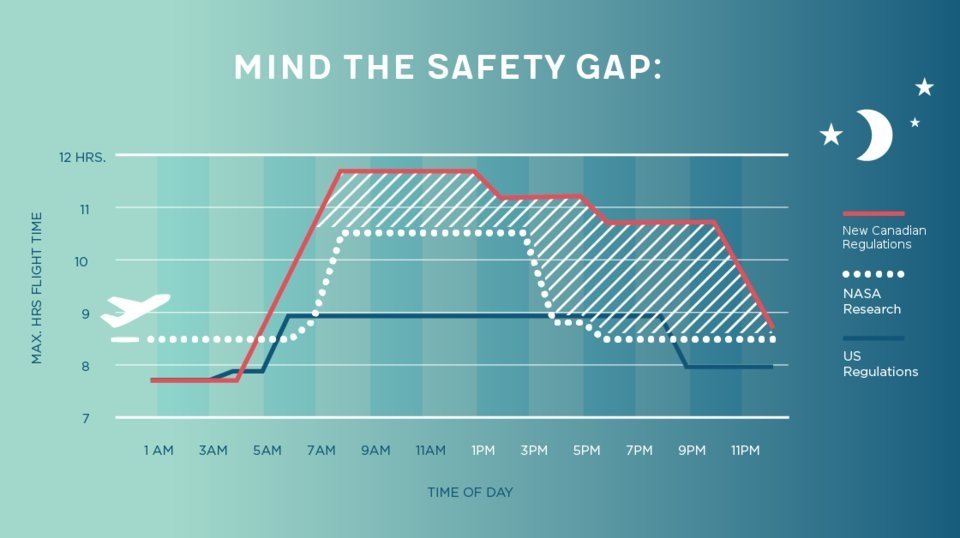 For years, Canada’s pilot fatigue rules have lagged far behind those imposed on American and European airlines. The long-awaited revised Canadian Aviation Regulations, announced this week by Transport Minister Marc Garneau, were supposed to address this issue. Sadly, they are a disappointment. Transport Canada has once again sided with the industry rather than protecting the safety and interests of the Canadian travelling public.

While aviation accidents remain infrequent, figures show that 80% are the result of human error, with pilot fatigue accounting for 15-20% of error in fatal accidents. The issue was brought to a head in 2009 by the Colgan Air crash in Buffalo, NY, in which 50 people lost their lives. Since then, virtually all Western nations have modified their pilot duty time regulations to avoid future fatigue-related accidents.

Except for Canada, until now.

Canada's long overdue new regulations are indeed more stringent than anything we have had before, but they fall short of US and world standards, as well as NASA recommendations. Transport Canada itself admits that the new regulations are less restrictive than the US ones. While the biggest change is a reduction in maximum pilot duty time from 14 hours a day to between 9 and 13 hours (depending on time of day and other factors affecting pilot fatigue), the good news mostly stops there.

The most egregious oversight is that Canada’s new rules allow airlines to operate flights of 11 hours or longer with only two pilots. In sharp contrast, the FAA has for years required US carriers to have a third (or fourth) crew member for flights longer than 8 or 9 hours. The winners, of course, are Canadian airlines which operate such long-haul flights. They will not require the augmented crews and their associated costs, which US airlines require.

But at what cost to travellers’ safety?

After an 11-hour flight, a Canadian airline’s two-pilot crew, which by then has been on duty non-stop for close to 13 hours, is handling the critical approach and landing. The same flight on a US airline has a three-pilot crew, where the landing pilot has had a chance to nap for several hours while the third pilot handled the cruise portion. When more difficult landing conditions are present, such as a blowing winter storm, the Canadian flight quickly becomes a higher-risk proposition relative to its American counterpart.

These fatigue-related human factors in aviation are precisely the risks that the new Canadian regulations were meant to mitigate, but they fail to do so.

Since 1996, NASA’s recommendation for commercial airlines has been to limit pilots to 10 hours of flying per 24-hour period “to reduce vulnerability to performance-impairing fatigue”. The American FAA went one step further in implementing its 8 to 9 hour limit. Minister Garneau is extremely well acquainted with NASA’s research, having flown three missions as an astronaut and having benefited from their safety expertise. It is troubling that he would not let Canadians benefit from that same expertise.

Canadians must wait until 2022

The deadly fatigue-related Colgan Air crash in Buffalo ignited the debate about the need for more stringent regulations in North America. The US managed to consult the industry and bring strong new regulations into force within 48 months. By 2014, changes came into effect across the US industry.

In Canada, however, although the Flight Crew Fatigue Working Group was formed in 2010, industry compliance is nowhere in sight. The new regulations will not be applicable for at least two more years, that is, 2020. For smaller commuter and air taxi operators, they come into effect in four years, bringing us to 2022 before full industry compliance, at the earliest. And that is for watered-down measures.

A squandered opportunity for pennies per passenger

Most aggravating is the fact that safety measures addressing fatigue issues are not expensive at all. The implementation costs of Canada's new flight duty regulations are estimated by Transport Canada to be $20 million per year. This works out to 13 cents per passenger segment flown last year, less in coming years as traffic increases.

For a few pennies more per flight segment, Canada could have equipped itself with world leading safety-oriented and science-based pilot fatigue regulations.

Instead, Canada remains at the back of the pack. Regrettably, it appears that a number of Canadian carriers have successfully lobbied Minister Garneau and Transport Canada into submission.

Alan Eugeni is an airline pilot based in Montreal, QC. He holds an engineering degree, MBA, Transport Canada ATPL, and FAA CPL. In 2017, he wrote "The Next Plane Crash: An Airline Pilot's Account of How the Race for Profits is Destroying the Safety of Air Travel in North America." The book is available on thenextplanecrash.com.